skip to main | skip to sidebar

Traditionally, Sentosa is the place I associate with tanning sessions with Chai and Anty, playing lame and very wet orientation games and well, basically anything touris-y and commercial. Pictures i take usually looks like this: 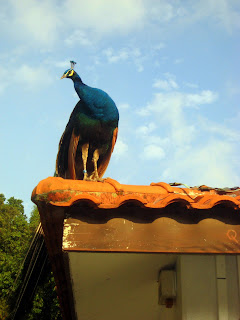 I think its an automatic reaction - whenever a peacock/peahen/peachick/peawhatever appears, everyone will whip out their cameras and frantically start snapping away. Unfortunately, I am too, a victim of such a reaction. 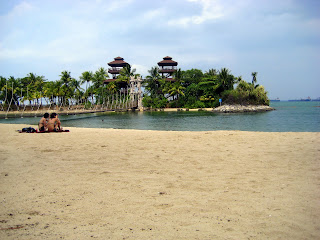 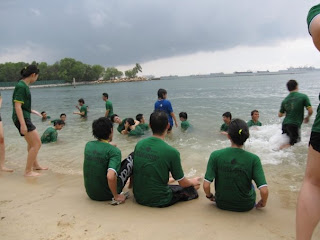 However, there's a 'wild' side of Sentosa that many of us overlooked. I was lucky enough to discover that non-commercialised side of Sentosa last Friday with TeamSeagrass. There is a stretch of intertidal-shore and a patch of coral rubbles at the western end of Sentosa. I wouldn't blog about the specific location, will explain myself later in the post!

The idea of us going there at 5.45 AM, is not simply to poke around that exposed patch of coral rubbles during superlow tide. We were there to work! (yes, work!!): 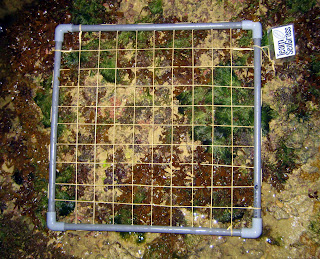 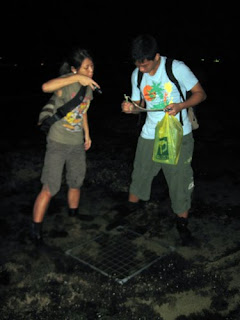 Here's Chun Foong and Jia Rui at their site, writing down the data,

and there's Kah Ming and I, probably trying to differentiate seagrass from seaweed there:

(photos of us working taken by Marcus) 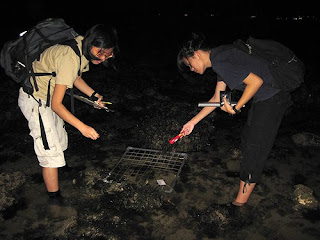 Being the new-bird, I was assigned to pair up with Kah Ming, who very patiently explained the procedures to me. Broadly-speaking, what we did was to note down the percentage of Seagrass in a particular site, with the aid of the above ingenious grid. The type of seagrass, and the amount of algae found on the seagrass were also noted. These datas are collected a few times annually to monitor the health of our natural seagrass.

On top of this, TeamSeagrass is part of a global Seagrass monitoring organization based in Australia, and thus, by collecting such data, we are also contributing to the study of the global patterns and distribution of seagrasses.

Now you may be wondering, what's so great about Seagrass, aren't they just plants growing in the water?!

well, firstly SEAGRASS is NOT SEAWEED. It's like comparing your garden plants with those annoying dandelions that grow everywhere and smoother your plants.

this is a picture of a certain species of seagrass: 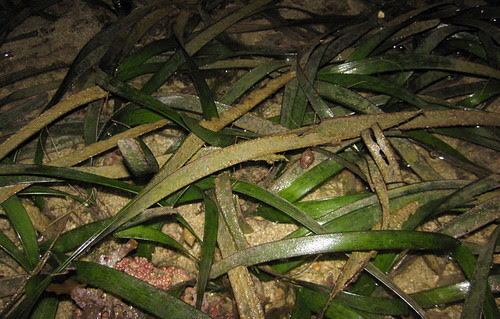 and these, my friends, are seaweeds: 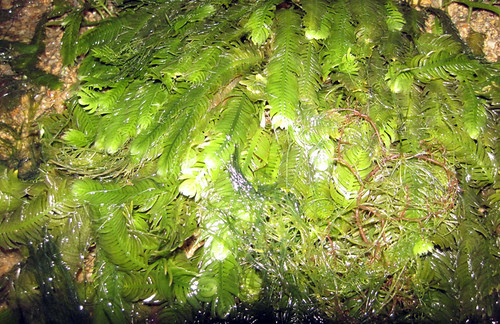 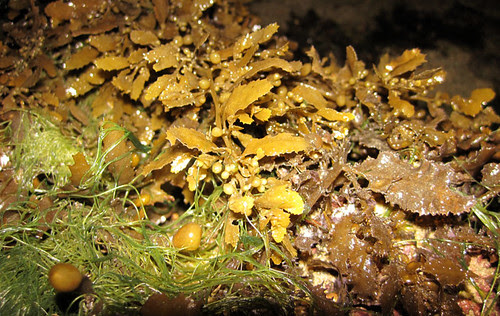 I know I know, its hard to tell them apart and being a geographer, I'm especially lousy at that. But don't worry! We'll get there eventually : D

anyways, my point about seagrass is that, they are very important as they:

#1 Provide a nursery for young fishes to mature

#2 Are home to many marine species (fact: five times as many fish live over seagrass beds as over seafloor made up of mud and sand)

I know the first 2 points are frightfully important, however, Im more inclined toward the 3rd point.

Coastal erosion is damaging to beaches (and effect which Ivan has blogged about) and the trees on the shore. With Seagrass beds, the root network consolidate sediments and reduces wave energy. Hence, protecting the shore from further wave erosion.

To illustrate points 1 and 2, here are some intertidal organisms spotted that day: 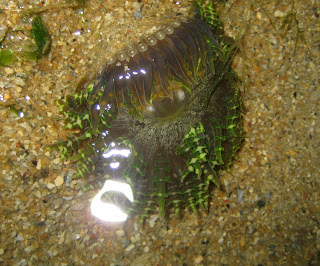 This is an anemone, really pretty green frills it has! 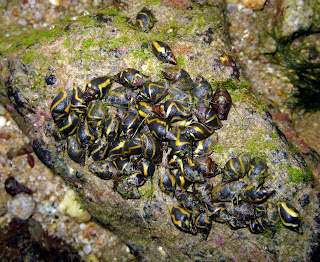 and the Lightning-Dove Snails, they enjoy forming clusters. Kinda sweet in a weird way (Jiayi, stop tearing your hair out). 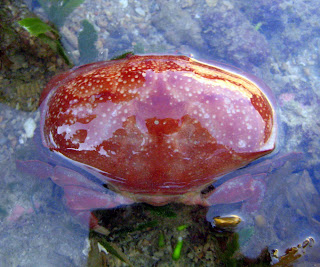 And this huge Red-Egg Crab that was strangely camera-friendly. Its color warns predators and probably humans crab-eaters that it is poisonous and it will be ill-advised to consume it. My mom thought it was cooked HAHAHAHAHAH.

and also, several species of Corals, both soft corals: 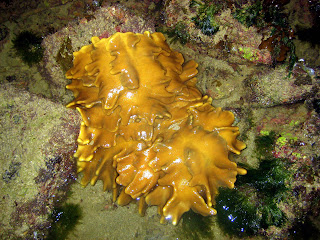 kah Ming thinks they are known as "Deadman's fingers". I love the name!!

and hard corals.. or is this an anemone, im not sure: 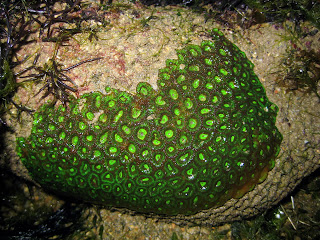 There are really more organisms there, but I didn't manage to photograph them, probably because I was too fascinated with the Sedimentary Rock Cliffs there. You can refer to the teamseagrass blog for more pictures of the marine creatures!

CLIFFS IN SINGAPORE - now, isn't that something new! and of all places, in SENTOSA. the most commercialised tropical island on earth.

The post is getting too long, and I have an American history lecture tomorrow at 10am HAHAHA so let me keep you in suspense. STAY TUNED! (: 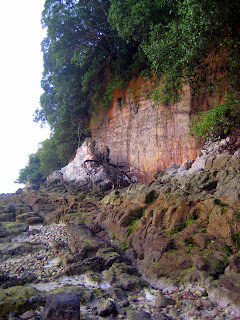 -Marcus for guiding, Kah Ming for putting up with my newness and teaching me many many things, Chunfoong, Abby, Joo Yong and Jia Rui for sharing this experience with me (:

-the water monitoring team led by Chenko for sharing this with me as well!

Serene Ng
Singapore - 100% urbanized. so much so that many overlook the fact that geographical processes are still taking place in our tiny Southeast Asian island. I'd like to open your Magic Eye, and SPREAD THE LOVE! (for geography)